Women Behind the Wheel: Empowering Women in Transportation

Previous Next
Women Behind the Wheel: Empowering Women in Transportation

Major strides have been made in the area of women empowerment and equality in the workplace. But in 2019, lack of female representation in certain traditionally male-dominated industries is still a major issue with serious social and economic implications.

While these numbers are slowly growing, stereotypes continue to steer women away from roles that are in actuality gender neutral!

Creating a more inclusive, gender-equal workplace for women has always been a priority at Musket Transport Ltd. Musket is committed to – and has a track record of –employing women at all levels of the company.


Still, we acknowledge the drastic difference, both at Musket and in the industry in general, between the number of women working in office roles versus on the road or in the garage. The underrepresentation of women in these roles in the transportation sector is largely a result of gender stereotype and stigma. Musket is committed to helping to debunk these archaic, inaccurate stereotypes and showcase the meaningful, lucrative career possibilities available to women in the field.

Musket Transport Ltd. signed a commitment with UN Women to uphold Women’s Empowerment Principles, known more commonly as WEPs. The WEPs agenda is designed with the goal of empowering women to participate fully in economic life across all sectors.

WEPs offers a seven-step guide to help business owners promote gender equality and women’s empowerment in their own workplaces. The principles provide a “gender lens” through which businesses can analyze their current initiatives, benchmarks, policies and reporting practices. Businesses who commit to WEPs use it as a tool to encourage both dialogue and action surrounding the advancement and empowerment of women.

The WEPs initiative was formed in a collaboration between UN Women, a United Nations entity devoted to working for the empowerment of women, and the UN Global Compact, the world’s largest corporate sustainability initiative with more than 12,000 businesses and other stakeholders in more than 160 countries. 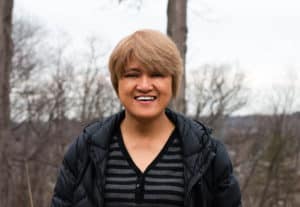 After hearing they were the best driver training school in town, I pursued and earned my AZ license at CHET. The 50 hours of “in truck” driving were incredibly helpful, and ultimately, I was hired to work for Musket, CHET’s parent company.

“I used to work as a professional caregiver, primarily looking after frail, elderly and stroke patients. Although I enjoyed that work, I was attracted to the transportation industry because of my love for driving. The

idea of getting paid to drive places appealed to me.

I’ve been a company driver at Musket for 4 years, driving the long-haul route to Montreal. I also sometimes do the city container as well as the New Jersey container.

My job allows me the ability to work on my own, not to mention freedom and flexible over my schedule. Succeeding in this career takes a lot of patience, the ability to think quickly in different situations and a commitment to being a team player.” 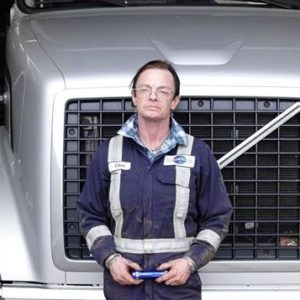 “I’ve always liked taking things apart and being around trucks and heavy equipment. I was exposed to the industry at an early age. Watching my friend’s father – an owner-operator – really piqued my interest.

But I didn’t become a mechanic early in life. I was 48 when I followed my interests and became certified. Before that, I had been a Canadian National bodybuilding champion and had no prior mechanical background.

I encourage women of all ages who are interested in changing career paths or getting back into the workforce to make the move – especially in the transportation sector! You can always go back to work or for training. You’re not stuck in any career path and it’s never too late to start again as long as you’re physically fit and healthy.

When I joined Musket, I became their first female mechanic. I’ve really enjoyed the great atmosphere and comfortable work environment. I also find the work extremely gratifying. I like that the work is finite; there is a beginning, middle, and end. I love the challenges and that the results are tangible.”

Where Does Canada Stand on Women’s Equality and Empowerment in the Workforce?

Currently, a woman working full time in Canada earns about 88 cents for every dollar of hourly wages earned by a man. Canada ranks 15th out of 29 OECD countries based on the hourly gender wage gap.

To help address this gender wage gap, in October 2018, the federal government launched new equity legislation as well as a new department for women and gender equality. The bill features a new Pay Equity Act, which gives affected employers with at least 10 employees three years to come up with a pay equity plan. The legislation will apply to federal public servants and political staff, as well as federally regulated sectors such as banking, shipping, and telecommunications.

The budget bill also establishes the Department for Women and Gender Equality, which will replace Status of Women Canada. The hope is that establishing the agency as a full department will help other departments incorporate gender-based analysis as a regular part of decision-making. The new department will have responsibility for all matters relating to women and gender equality.

The federal government has promised new pay equity legislation in its February budget, which will focus on taking action to benefit women and increase their participation in the workforce.

Encouragingly, while women are still grossly under-presented behind the wheel and in the garage, they are already playing other pivotal roles in the industry, from parts technicians and safety and loss prevention specialists to managerial staff and dispatchers. That women are filling these roles is an indicator that the tides are slowly turning and the traditionally male-dominated sector is becoming more and more female-friendly.

Musket Transport Ltd remains steadfast in its commitment to exploring new ways to attract women who may be well suited to various careers in transportation.